Amazing Discovery Number 3 That Won’t Make You Question Anything

And so we come to the next Amazing Discovery that will only make the most gullible and credulous question everything. This one – the “Hidden Character Stone” – is so bizarre that I frankly don’t understand how anyone could believe the claims made for it. So, here we go with a continuation of Spirit Science’s […]

Sometimes, just the name of a website is enough to make my heart sink. So, when my partner began reading out the name of a page that a mutual friend had ‘Liked’ on Facebook, I had an awful feeling of déjà vu: Spirit Science. As if to confirm my worst fears, the Welcome page includes […]

Meta
Home » Bad Archaeology: what is it? » Indiana Jones does it again

Indiana Jones does it again

Poster for the film

Indiana Jones and the Kingdom of the Crystal Skull

This page, inspired by the release of the film Indiana Jones and the Kingdom of the Crystal Skull examines the way in which fact and fiction can become blurred in Hollywood film, and what this means for archaeology.

Analysing blockbuster movies can be a perilous exercise for an occasionally curmudgeonly archaeologist. As you can imagine, there are a million and one sites out there on the web whose purpose is to point out the faults, inaccuracies and various anachronistic quirks found in Hollywood films. Did Spartacus wear a wrist watch? Was Braveheart a blue-faced tartan-wearing Australian? Did the Imperial thumbs-up mean death or survival to a prostrated Roman gladiator? Why should you even care about such things when halfway through your popcorn in Row J at the local Odeon? In short, you shouldn’t. Life is far too brief. Even if it wasn’t, yours would be brought to a mercifully premature end by exasperated friends and family during the umpteenth time you spun that oh-so-interesting tale of how Captain Jack Sparrow couldn’t possibly have worn copper earrings in the highly saline atmosphere of the equatorial tropics.

Back to the nature of truth in Hollywood film. Do you remember Takako Konishi? She was a young woman from Japan who apparently paid the ultimate price for confusing fact with fiction. At the very beginning of the film Fargo, the screen fills with the following message: “This is a true story. The events depicted in this film took place in Minnesota in 1987”.

Well, it seemed this mischievous opening from producer/directors the Coen Brothers proved fatal for one fan of the movie. One scene towards the end of the movie features Steve Buscemi frantically burying nearly $1m in a field in the middle of nowhere. But, hold on a minute, it must have been somewhere, since this film was based on a true story. The allure of this buried treasure and X Marks The Spot (now where have we heard that before?) took hold of Konishi and, so the story goes, she travelled to Fargo, Minnesota in search of the loot. Her dead body was recovered in 2001 and it looked like she must have perished after a futile search digging in the inhospitable conditions of the Minnesota hinterlands.

Perhaps Joel and Ethan Coen were stretching the boundaries of convention with their notorious “true story” line. However, even without such an enticement to suspend one’s disbelief, the temptation is still there to let go. For some, a willed credulity continues well after the blinking reintroduction to society following a pleasant few hours in Movieland. It seems that whenever artists create fictional characters in fictional times and fictional places, there will always be a sub-strata of human being who will be unshakable in their belief that it REALLY HAPPENED.

What has concerned archaeologists and archaeological educators is the drip-drip effect of continual reinforcement and repetition of aspects of past human existence which we know not to have happened. We need not go straight to the lack of material evidence for favourite characters such as King Arthur or Jesus. Instead, take a fairly prosaic example where, handily, the work has already been done.

Charlton Heston as a "galley slave"

In 2001, Simon James (Reader in Archaeology at the University of Leicester) published a short article in the journal Public Archaeology in which he demonstrated that the Roman galley slave (so integral a plot device for the film Ben Hur) was most probably an invention of the book’s original author: Lew Wallace. In fact, without too much historical investigation, and with just a dash of logical deduction, it soon becomes implausible for the Romans to have powered their boats using people who cannot move due to the chains and who have little interest in surviving, let alone winning the battle for their slave masters. A galley rower is not the same as infantry cannon fodder; you need them to work for you in order to be effective. However, such historical reality has become irrelevant in the face of repeated showings of Ben Hur. In general, people’s expectations are that Charleton Heston played an authentic Roman galley slave. Refutation of this fact would result in as much of a shock as the revelation that he’d had a passionate affair with Michael Moore.

Whatever the likelihood of the existence of the Roman galley slave in antiquity this example serves to prove that with enough publicity and plausibility, certain fictions will become established as fact, regardless of the evidence. Furthermore, the repetitious nature of the so-called “factoid” is key to it’s plausibility. To quote Lenin: a lie told often enough becomes the truth.

We shall have to see if The Kingdom of the Crystal Skull implants certain ideas about Mayan or Aztec archaeology in the minds of the general public. Only time will tell if archaeologists can expect to spend the next ten years answering questions about ancient curses and alien intervention. Or even whether Russian agents really spoke as comedically as Cate Blanchett thinks they did.

Despite saying this, many fully-qualified, plodding, domestic archaeologists began their studies as a result of being interested or inspired by seeing swashbuckling adventurers on screen, racing through jungles with antiquities under their arm and bandits on their tail. 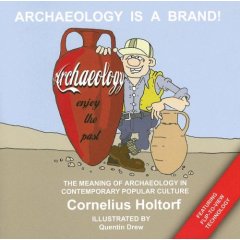 Archaeology Is a Brand!

Archaeology is a Brand

Hollywood has found us archaeologists a continual source of inspiration. Whether it’s Lara Croft fending off aggressive wolves or Daniel Jackson looking for Stargates, the glamour of the swashbuckling treasure hunter has proved good box office value for the mainstream movie industry. It seems that the public have an appetite for adventure with an archaeological twist. Despite attracting a gentle mocking from more straight-laced people within the discipline these adventurous characters have inspired young students to pursue degrees and careers in archaeology. Although we can come across as socially-inept wierdos, we oh-so-terrestrial archaeologists are not immune to the magic of celluloid inspiration!

>p?Any attempt by archaeologists to engage with the wider public will be framed by popular media representations. Any one who has conducted an archaeological excavation in the public glare finds themselves answering a myriad of bizarre questions. Most popular amongst these are “have you found any gold” and “have you found any dinosaurs?”. Indiana Jones is the most common reference point for archaeologists and we are judged by his standard. Im sorry to report that the lack of leather jacket, fedora and whip can be a disappointment for the casual observer at most UK excavations.

Despite the high profile that archaeology gets through Indy, he does entrench a number of unhelpful and unrealistic stereotypes of the archaeological life. Foremost among these are the glamorous foreign (occasionally hostile) destinations to which the intrepid archaeologist journeys with the primary aim of recovering a specific artefact at the expense of someone else. Marcus Brodie may be happy that Indy can recover rare and powerful objects for the university museum but another Brodie would not be too happy about that kind of activity. I refer to the far-from-fictional Dr Neil Brodie, Director of the Cultural Heritage Resource at Stanford University. Dr Brodie has campaigned for years against the pernicious trade in illicit antiquities with an energy and good humour which only Indy could match.

Despite these valiant efforts, the scourge of looting and trafficking continues to blight archaeology, a predominantly noble academic enquiry into our human past. As one UK professor of archaeology once told me, “archaeology is too important to be left to human greed and profiteering”. Alas, this hasn’t got through to everyone. We can be pretty sure that when the media describes someone working today as a “real life Indiana Jones” they are likely to be someone with questionable methods, theories, and ethics.

A character such as Indiana Jones is fertile territory for adventure fiction but on the whole he makes a poor advocate for his profession. However, the Kingdom of The Crystal Skull does feature this knowing and playful exchange on the subject of exactly what it is that Indy gets up to. Shia LaBeouf’s character Mutt says
“You’re some kind of treasure hunter, or grave robber?”
Indy replies, taken aback by such a description
“I’m a tenured professor of archaeology!”.

The subtle shades of what lies between these two descriptions are well populated by many people today who describe themselves as archaeologists. And as for Indy, sure, you may want to share his adventures but do you want to be the one chasing him to file that site report?!

And what of Takako Konishi, the tragic Fargo treasure hunter? A cursory trawl of the net reveals that she too was subject to media mis-representation. Her death had become a kind of factoid. Writing in The Guardian newspaper, film-maker Paul Berczeller describes how, when seeking to reconstruct the last weeks of her life, he discovered that Takako Konishi had visited the area before, to see a boyfriend who she had known in Tokyo and who it seemed wished nothing more to do with her. A suicide note was found by her family and the police. Her tragic death was nothing to do with the film Fargo.